Wealth Building Secrets Of The Forbes 400

A Few Simple Math Rules That Determine Your Wealth

I'm a junkie for anything claiming to divulge the secrets of how the rich got that way.

After all, I coach business owners and investors on how to build wealth, so any recipe for the “secret sauce” is tasty fodder for my furtive mind.

Recently, I ran across an admittedly unscientific study of the Forbes 400 called “A Recipe For Riches” providing some interesting perspectives on how the rich got that way.

The article opens with the question, “Are billionaires born or made?” and then searches for common attributes among the Forbes 400 in an effort to discover the secrets of self-made wealth.

What are their conclusions?

Surprisingly, most of the article isn't very useful. Actually, it was a disappointment.

By the way, that's the way most of this stuff works out: I sort through mountains of junk to find an occasional diamond-in-the-rough to share with you.

For example, the Forbes article points out how a high percentage of the leaders in the technology industry dropped out of college. Well, duhh!

Technology was growing at the speed of light when these guys were in college, and their aptitude for all that newfangled techie stuff, combined with the irrelevancy of traditional education to that business model, made for a completely unique and unrepeatable situation.

Only a fool would conclude it's a good idea to drop out of college because Bill Gates, Steve Jobs, Michael Dell, and Larry Ellison did the same. It was an unrepeatable, one-time event we missed. It was only valid for a few special people.

Similarly, the article points out a statistically significant number of the Forbes 400 were born in the fall. Well, so what? There's not much use in that fact, either. I'm somewhat committed to my birth date at this point in life.

What I care about is stuff that can help my readers (you) and coaching clients make changes in their lives that support building wealth. That was why I got excited by the lead piece in the article.

Related: How to be a pro at growing your wealth

It’s an idea you can apply to your own life that I have also found true with my successful financial coaching clients.

Forbes noticed that a significant percentage of self-made wealth went to people whose parents had a high aptitude for math. They concluded “the ability to crunch numbers is crucial to becoming a billionaire, and mathematical prowess is hereditary.”

Hmmm, their conclusion sounds a little too hyperbole for my tastes. Let me tone it down a little and repackage it into something you can use…

I have long stated that building wealth is just simple math. In other words, I agree with Forbes that developing some comfort with numbers and basic math is important if your goal is financial security.

In fact, I credit my financial success to a few simple mathematical insights I had back in college that I applied in a practical way.

Let me explain them here so you can do the same…

The first insight involved how money compounds. Once you know the math behind how wealth compounds and grows, you’ll notice two absolutely certain, mathematically provable conclusions:

In other words, this first insight about the mathematics of growing wealth implies two very actionable rules for managing your financial life:

These are both clear cut, actionable rules to live by if your goal is financial freedom, and they’re both mathematically provable.

In other words, Forbes was right: math matters to financial success.

Notice that none of the math is intimidating. It’s simple, intuitive, common sense application of numbers.

You math phobics out there have no excuses. Anybody can understand and apply this stuff – even the mathematically challenged.

The second insight I had during college was mathematical in nature, but common sense in practicality. It relates to happiness and money.

What I realized is my happiness had little to do with how much money I made. Some of my happiest days were when I was poorest because I was learning, growing, being creative, and had great friends.

I watched my friends graduate into high-paying jobs and spend all their earnings on lifestyle. Their financial situation didn't improve over other friends who remained in college and were having more fun.

I put these observations into practice by not making the same mistake.

I maintained my college lifestyle after graduating even though I was growing my income. I banked my ever-increasing savings rate to my investment portfolio.

These two principles – limiting lifestyle to less than income to free up savings for investments, and the mathematics of how those investments compound and grow – were the root cause of my retiring early and wealthy at the ripe, old age of 35.

Related: A better investment strategy than buy and hold

They’re both mathematically based, and they’re both simple to understand. Anyone can do it.

I point this out because I’ve found an intuitive level of math competency to be a common denominator among financially successful people – just like the Forbes 400.

Let me be clear – we’re not talking about advanced math here. Instead, we’re talking about the common sense application of what basic, provable math principles tell us.

For example, I know prosperity consciousness followers preach the idea of buying new clothes and a fancy car so that you feel successful (fake it 'till you make it), but the math tells you it’s nonsense.

Doing the math provides a scientific check to keep you from being deluded by all the rubbish ideas out there.

Nobody ever spent their way to prosperity (maybe the U.S. Government should listen?). The truth is, savings results from the gap between lifestyle and income, and savings is what feeds investments.

Investments grow based on strict mathematical rules. Again, these aren’t my opinions – this is just the way the math works. It’s inviolable truth.

It's not complicated either – simple addition and subtraction is sufficient.

Anyone reading this blog has the skills. You just have to intuitively grasp the simple math and apply the principle it implies to your daily life.

How To Convert Math Rules Into Daily Life Practice

The math implies the rule, and the rule implies a daily life practice. If you can connect the two, then you can build wealth.

The math isn’t all that important because it just implies the rule: the daily life practice of living that rule is what will determine your success. That’s the key point.

Anyway, I could go on and on about math rules, but you get the basic idea. It’s an important concept with far reaching implications. 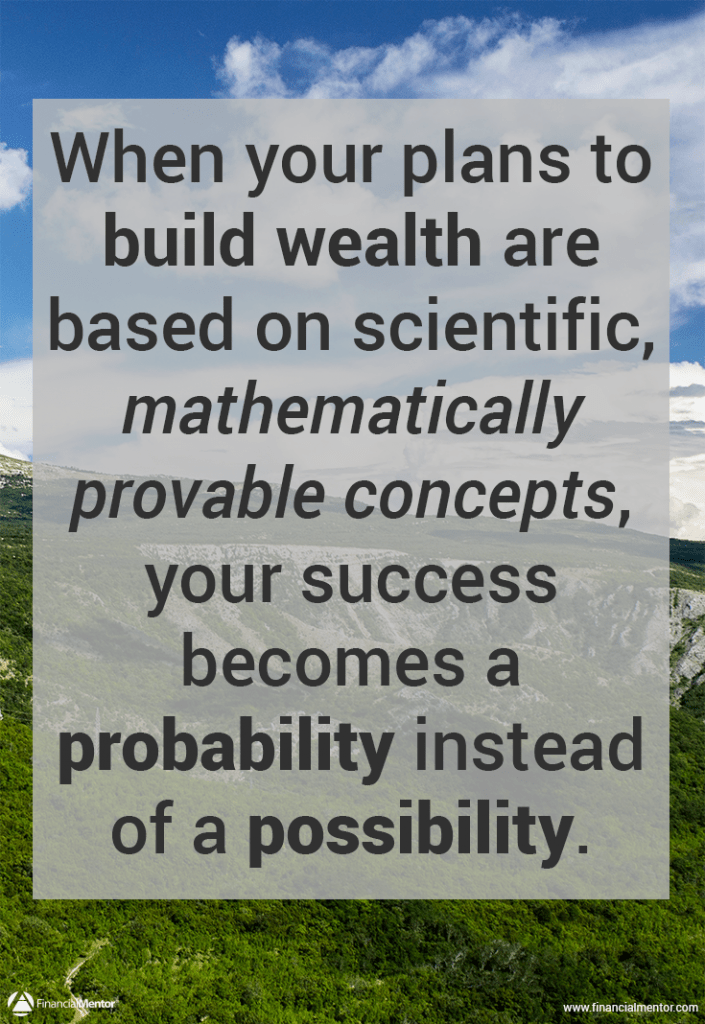 There’s no question the Forbes 400 required a few more math rules than discussed here to reach billionaire status, but I guarantee the principles are identical.

It’s about having a basic aptitude for seeing the math behind business so that your plans are grounded in science rather than floating in speculation.

When your plans to build wealth are based on scientific, mathematically provable concepts, your success becomes a probability instead of a possibility. Building wealth becomes a question of “when” – not “if.”

That was how I approached the wealth building process and it worked for me.

It's also what I teach my financial coaching clients and students in this wealth planning course, and it works for them.

It's fun to see that studying the common factors behind Forbes 400 success leads to a similar conclusion.

The One Decision That Can Make Or Break Your Financial Future

There are only four paths you can choose from.

Click below to find out which path is best for you, and why.

The Great Bond Bubble Is Now! What's Next...

The Solution To Investment Losses

What Is A Good Investment?

My Worst Investment Loss Exposed! (And the Gut-Wrenching Lessons Learned)

I wanted to share the good news with you. We are sending off a check tomorrow that will put to rest the last of our credit card debt. It is a surreal feeling, but a moment we’ve been looking forward to for two years now. We couldn’t have done it without your help – we owe you many thanks. And since you walked through so much of it with us, we wanted you to be the first to know. Thanks again.